​Nokota® horses will have a presence in the upcoming national Lewis and Clark expedition Bicentennial (2003- 2006), thanks to Lakota artists Butch Thunder Hawk and Jo Esther Parshall. The artists are using mane and tail hair from Nokota® horses in a project to recreate objects from President Thomas Jefferson's "Indian Hall."

As was Lewis and Clark's 1804 to 1806 expedition, the bicentennial will be launched from Thomas Jefferson's Virginia home, Monticello. Now an historic site, Monticello will host a week-long "Lewis and Clark Exposition" January 14-19, 2003, featuring lectures, exhibits, musical performances and other programs relating to the expedition and its significance for American's today. On January 18, representatives of the U.S. government and the National Congress of American Indians will officially commence the bicentennial, kicking off three years of events around the country (for more information see www.monticello.org). 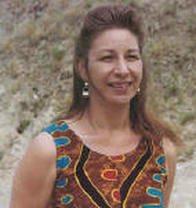 Lakota Quillworker Jo Esther Parshall. Photo by Castle McLaughlin.
​One of the highlights of the exposition will be the opening of a new exhibit, titled "Framing the West at Monticello: Thomas Jefferson and the Lewis and Clark Expedition." The exhibit will reproduce Jefferson's Entrance Hall circa 1807-1809, when he displayed many Native American objects acquired by the Corps of Discovery. Since the original objects have been lost, Monticello has commissioned Native American artists to create representative objects for the exhibit. In 2000, the Peabody Museum at Harvard and Monticello formed a collaborative Native Arts Project, enabling the artists to visit the Peabody Museum to study the original Indian objects that remain from the expedition (for more information see www.peabldy.harvard.edu/Lewis and Clark).

Hunkpapa Lakota artist Butch Thunder Hawk, who teaches traditional tribal arts at United Tribes Technical College in Bismarck, North Dakota, has played a key role in the Peabody-Monticello project. Butch and his students have produced more than a dozen projects for Monticello, including armaments, shields, and pipes. They used hair from differently colored Nokota® horses-real Indian ponies- on many of these objects. The Nokota® hair was taken from both living and dead Nokota® horses-primarily stallions-by Seth Zeigler and Frank Kuntz. Seth labeled each clump of hair with the name of the horse, and Butch recorded which horse's hair was used on which object. Seth also supplied white hair to Jo Esther Parshall, an award-winning quillwork artist who lives in New Town, North Dakota. Jo Esther, who is a horse lover and is famous for her porcupine quill horse masks, has been commissioned to create several items for Monticello, including leggings with quill-wrapped horse hair. 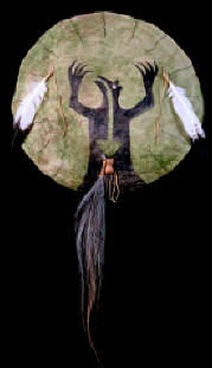 Monticello shield with pendant of Target's hair, by Butch Thunder Hawk, 2002. Photo courtesy of the Thomas Jefferson Foundation.
​One of the featured objects in the Monticello exhibit will be a magnificent buffalo-hide shield made by Butch Thunder Hawk. The shield is painted with a powerful image of a bear. From the center of the shield hangs a pendant of very special, grey horse hair. The hair came from the tail of "Target", a dominant blue roan stallion who was born in the Little Missouri badlands circa 1980 and died of old age during the winter of 2001. In his prime, Target was considered an "outlaw" by the National Park Service staff at Theodore Roosevelt National Park, who tried unsuccessfully to capture him for several years. He matured during the height of the NPS program to remove original wild stallions from the Park and replace them with domestic animals. Target built a large harem of mares by taking them from stallions that the Park favored, and became a target of their removal campaign-hence his name. He was finally caught in 1991, and lived for another ten years on the Kuntz Ranch. But he always remained wild, never letting his guard down and relaxing into the relative comforts of captivity. He grew old and grey with his head up and his nostrils flaring, ready to run, at the first sight of a human.

It is fitting that Target will have a place of honor at the president's house, where he can represent the spirit of the west for generations to come.