​Theodore Roosevelt, who ranched in the Little Missouri area between 1883 - 1886, wrote that:

​In a great many--indeed, in most--localities there are wild horses to be found, which, although invariably of domestic descent, being either themselves runaways from some Indian or ranch outfit, or else claiming such as their sires and dams, are yet quite as wild as the antelope on whose range they have intruded. 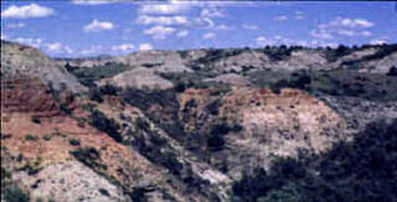 The North Dakota Badlands
​Great Depression Era - Many of the wild horses of the Northern Plains are intentionally exterminated by both locals and the United States government as competition for faltering range lands.

Late 1940s - 50s - Theodore Roosevelt National Park is formed and fenced, inadvertently enclosing some of the wild horses of the area

Park's Creation - 1979 - Theodore Roosevelt National Park adopts a range of varying policies towards its horses, but most of these are aimed at extermination, which keeps the population very low and very wild, sometimes dropping under 20 individuals

1979 - Theodore Roosevelt National Park gives in to popular public approval of its wild horses and declares that it will maintain a small "demonstration herd" to simulate what the range would have looked like during Theodore Roosevelt's stint in the area.

1979 - Leo Kuntz purchases his first Nokota® horses, Luppy, and then a few months later Bad Toe, from local ranchers in the Medora area. His full intention was only to use these horses for competing and for breeding to create competition horses with more bone, more brains, more agility, more endurance, and more heart than any other modern horse, but this would be the beginning of a very long, very arduous, and still very precarious fight for the survival of an entire type of horse, the last of the original horses of the Northern Plains. 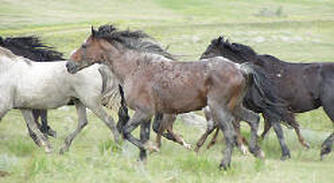 Early 1980's - Theodore Roosevelt National Park decides to "upbreed" its current herd of wild horses by introducing a range of outside horses over the course of a few years, including a part Shire bucking horse stallion, an Arabian stallion, a Quarter Horse stallion and mares, and three Bureau of Land Management stallions. Naturally, these horses could not come even close to competing with the locally adapted wild horses, so the Park also had to couple these releases with very selective roundups to remove the original horses. 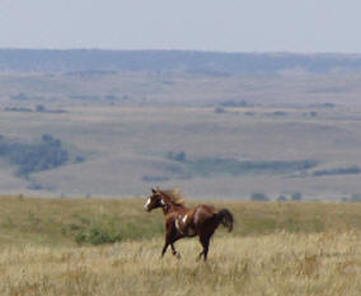 Spotted Reesy
​1991 - Theodore Roosevelt National Park removes still more of the most important Nokota® horses, some of which are yet again purchased by Leo and Frank Kuntz. Infamous for his defiance but ultimate capture during this roundup was Target. Other important purchases included Painted Lady, the Bohen Blue, Remy, the two Bay NPs, and Reesy.

1993 - During the legislative session, the Nokota® horse is declared North Dakota's Honorary Equine.

1996 - The struggles of Frank and Leo Kuntz to save the Nokota® horses are detailed on ABC World News with Peter Jennings.

1997 - Theodore Roosevelt National Park again removes the most Nokota® of its horses, with Leo and Frank purchasing the most important, including Blue TT, Painted Canyon II, and Blue Canyon.

2000 - Yet again Theodore Roosevelt National Park holds a devastating roundup, this time removing the last Traditional Nokota® horse, 9007, from the wild. 9007 was purchased by NHC supporters, as were such horses as 8102, the Grigg's Grey, Luna, and 8503. 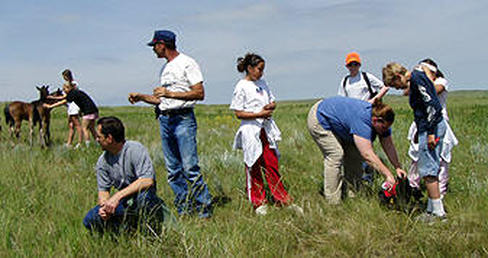 Horses on the Prairie Camp
​June 2003 - "Horses on the Prairie: An Equine Science, Math, and Culture Camp" funded in part by NASA and the American Indian Higher Education Consortium gave both Native American and non-native children from various Bismarck elementary schools a once in a lifetime opportunity to meet the Nokota® horses while also furthering their scientific, cultural, and artistic studies that all tied in with the Nokota® horses.

October 2003 - Theodore Roosevelt National Park held yet another very selective roundup that left their horses looking even less like true Nokotas. Fortunately, various Nokota® supporters purchased some of the most important horses that were removed, including Wanblee and Lucky Dust.