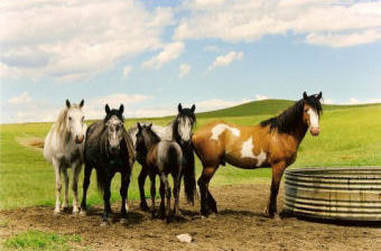 Papa Smoke and his band of Nokota® mares and foals.
Nokota® horses share a set of physical and behavioral characteristics that reflect their known history since the late 1800s (see "A Brief History"). Their ancestors include early Native American and frontier ranch horses bred for use as war horses, buffalo runners, and all-purpose saddle horses. Many of those horses were descended from Spanish colonial stock. During most of the twentieth century, they lived wild in the rugged Little Missouri badlands, an area of rugged topography, erratic climatic conditions and long, sub-zero winters. During that time, their survival depended on avoiding capture by humans. These physical and social pressures combined to form durable, athletic, intelligent horses.

Those conditions also seem to have selected for the retention of the original phenotype associated with late nineteenth and early twentieth century ranch and Indian horses on the Northern Plains. Historic photographs taken of Nokota® ancestral stock-the Lakota (Sioux) horses and their offspring owned by the Marquis de Mores and the HT Ranch (see "A Brief History")- show that today's Nokotas look remarkably similar.

The overall type is somewhat larger and rangier than the Spanish colonial horses of the southern Plains ("mustangs") while retaining typical Spanish coat colors (especially roan, frame overo, and dun) and other points of conformation. During North Dakota’s open range days, ranchers deliberately crossed Spanish colonial and “native” (wild and/or Indian mares) with larger stallions, hoping to preserve the agility and stamina of Southwestern strains while increasing their size and strength. The result was an all-purpose ranch horse that could be both driven and ridden and required little care.

Historically, such horses were known by terms such as "Montana horses," "Northern Plains ranch horses," and "cayuses." Western frontier artists Charlie Russell and Frederic Remington rode and painted many ranch and Indian horses that looked like today's Nokotas. Remington noted that horses of the Northern Plains such as the "cayuse" had developed a distinctive phenotype based on their mixed ancestry:

The cayuse is generally roan in color . . . he is strongly built, heavily muscled, and the only bronco which possesses square quarters . . . This native stock was a splendid foundation for the horse breeders of Montana and the Northwest to work on, and the Montana horse of commerce rates very high. This condition [is to the credit of] a strain of horses imported from the West, which . . . had its foundation in the mustang. 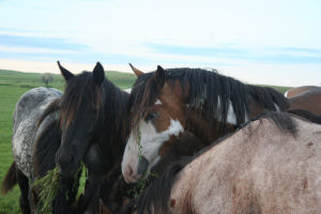 This group of young Nokota® stallions exhibits a range of typical coat colors, including roans and a dun overo.
​Nokotas generally exhibit coat colors characteristic of colonial Spanish horses. Many Nokotas are blue roan-so many that his relatively rare color has become a hallmark of the breed. Other common colors are black (the base color for blue roan) and grey. Frame overos and sabinos-some with blue eyes-are also considered characteristic (tobiano patterns occur only with cross-breeding). Typical overo patterns consist of one or a few irregular white body spots and bold white facial markings, although "medicine hat" patterns occur occasionally. Other colors include red roan, bay, brown, and chestnut. A few Nokota® lines produce dun and gruella offspring, sometimes with pronounced "tiger stripes" on their legs and withers. Some horses change colors during the course of their lifetime: roans may be born dun or black and grey as they age. 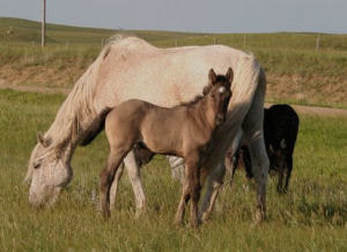 Many Nokota® foals are dun or gruella but change color as they mature.
Nokota® owner Margaret Odgers coined the term "the equine all-terrain vehicle" to describe the athleticism, durability, and stamina that are Nokota® characteristics. Nokotas are sound, low maintenance horses with extremely solid legs and strong hooves. They all seem to have an uncommon jumping ability and are very handy and agile. These qualities have made them popular among fox hunters (see related article in Covertside: The Magazine of Mounted Foxhunting, July 2005). Mentally, Nokotas are "problem solvers," who actively think their way through things, sometimes quite independently. At the same time, they tend to develop unusually strong, reciprocal bonds with those they trust. Jean King trained her Nokota, Bright Cloud, from a wheelchair (see Stephanie Lawson's article about Jean King and Bright Cloud, "He Put the Life Back Into Me"). They are highly interactive with “their” people, and tend to be kind, brave, and reliable. 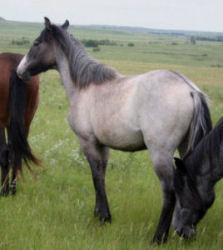 This “dun factor” filly has a dorsal stripe as well as leg stripes.
​While all Nokotas share many characteristics, the foundation stock acquired from the wild by Leo and Frank Kuntz during the 1980s exhibited two somewhat different phenotypes. These types have been further segregated by selective breeding and are now called "Ranch Nokotas" and "Traditional Nokotas." Horses that exemplify each end of the spectrum are easy to differentiate, but many horses of pure Nokota® ancestry fall somewhere between the two extremes. 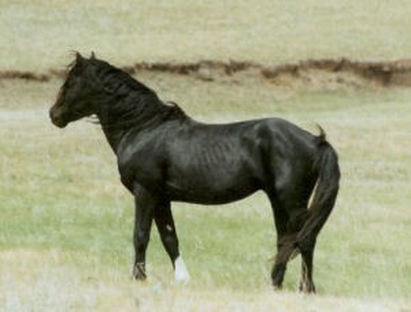 Black Fox, a Traditional Type Nokota® stallion.
​While the Nokota® population is of mixed ancestry, a small percentage of the horses exhibit conformation that is consistent with a "Spanish colonial" heritage, quite similar to the Spanish mustang breed. These horses have come to be called “traditional” Nokotas, in homage to the earliest Indian and ranch horses. To read more about contemporary American horses of Spanish colonial descent, including the Nokota, see Dr. Phil Sponenberg's survey, The North American Colonial Spanish Horse, Part II: Foundation Strains of the Present Breed.

"Traditional" Nokotas are small (14-15 hh) and relatively refined, exhibiting many concentrated "Spanish colonial" conformation traits. In 1994, Dr. Sponenberg evaluated both the Theodore Roosevelt park horses and the Kuntz horses, and concluded that there were about twenty individual animals owned by the Kuntz brothers (and none left in the park) that were phenotypically consistent with accepted standards for "Spanish colonial" horses. There may have been diverse and varied Spanish influences on the Nokota® population over the past century. On the advice of Dr. Sponenberg, Leo Kuntz has selectively bred "traditional" Nokotas to preserve their "Spanish" characteristics, and their numbers are increasing.

"Blue Moon Rising", a traditional Nokota® gelding owned by Margaret Odgers, was recently accepted for membership in the Horse of the Americas registry, an umbrella organization for horses of Spanish colonial descent. While the Spanish heritage of Nokotas is evident in their appearance, it is also suggested by their stamina, intelligence, and movement-Dale Offerman's traditional stallion, "Chief" even performs #34;airs above the ground.!" 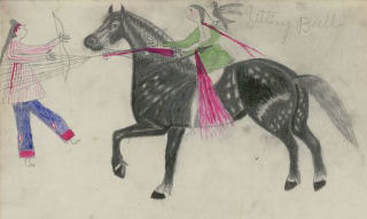 A drawing by Sitting Bull depicting one of his own war horses. Courtesy the National Anthropological Archives, Smithsonian Institution. Copyrighted, and all rights reserved.
​Dressage riders have jokingly called Ranch Nokotas "Nokota® Warmbloods.", and they are certainly proving to be popular and useful sport horses. They are generally larger and heavier boned than the Traditional type, often maturing at 16 hh or above. Ranch Nokotas reflect a heritage of intentional, historic cross-breeding with Thoroughbreds, draft horses, and possibly with larger Iberian strains such as Andalusians. At the same time, they share all of the same colors and many points of conformation with the "traditionals," as well as their temperament. Historic ranchers and Native people developed this strain as all-purpose horses, and versatility remains their hallmark. Because of their size, power, and athleticism, Ranch Nokotas make excellent saddle horses, and we are hoping that someone will develop them for driving. Ranch Nokotas are currently being used as dressage horses, fox hunters, show jumpers, and as packing and trail horses. Well conditioned Ranch Nokotas present all of the power and fluidity of movement associated with popular dressage and forward seat breeds, while their colors and character make them stand out in any crowd. 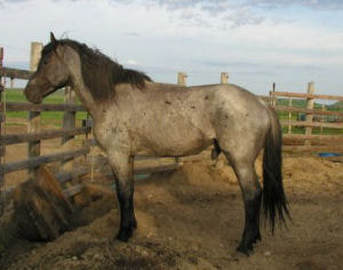 Spud, a Ranch Type Nokota® stallion
​These horses were historically the backbone of the ranching industry, and are the type produced by the HT ranch and many others. During the first part of the twentieth century they were used as loggers, ranch mounts, wagon horses, roping horses, and rodeo pick-up horses (but not as rough stock-Nokotas do not have the temperament to make good bucking horses). These Nokota® are similar to some of the early, stouter Quarter Horse ranch lines, such as those bred by the Hancock family. A heavier, draftier earlier twentieth century type that may have contributed to the Nokota® were the "Dakota stouts," Percheron crosses that were famously all-purpose, "can do" animals that were commercially bred and exported to other farming states. Photographs of the wild herd in the park taken during the 1960s suggest that some individual animals may have had Andalusian or other Spanish ancestry. 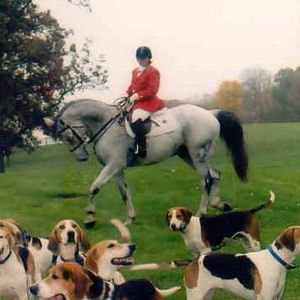 Thomas, a Throughbred/Nokota® cross owned by Jennifer Schuck, Joint-MFH of the Long Lands in Minnesota
While they cannot be part of the conservation effort, out-cross horses can be recognized in the The Nokota® registry. The Kuntz family privately developed a line of pony crosses for driving and riding, and these make outstanding children's ponies. They also have continued to breed Nokotas to their own family lines of running Quarter Horses, Thoroughbreds, and others. Many Nokota® crosses have been developed into outstanding cross-county racers, sport horses, gaming horses, and fox hunters.